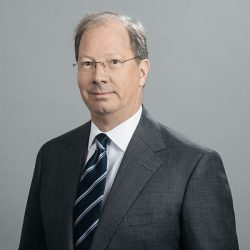 Stephen Thorington joined EQT’s Board of Directors in September 2010 and currently serves as the Chair of its Audit Committee. He retired in April 2006 as Executive Vice President and Chief Financial Officer of Plains Exploration & Production Company, a role in which he served since September 2002. He previously held executive management positions at Plains Resources, Ocean Energy, Seagull Energy Co. and The Chase Manhattan Bank. Stephen was a Director of the general partners of EQGP Holdings and EQM Midstream Partners, EQT’s publicly-traded master limited partnerships, since April 2015 and February 2018, respectively, through October 2018. He also was a Director of QRE GP, the general partner of QR Energy from January 2011 through the acquisition of QR Energy by Breitburn Energy Partners in November 2014. He also served as a Director of KMG Chemicals from May 2007 through December 2014, at which time he retired from the Board at the conclusion of his then-current term.