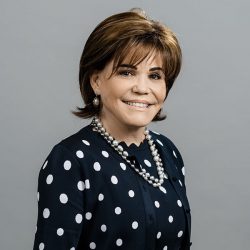 Hallie Vanderhider joined EQT’s Board of Directors in July 2019 and currently serves as Chair of the Management Development and Compensation Committee and as a member of the Audit Committee. She has served as Managing Director of SFC Management since January 2016. Previously, Hallie was Managing Partner of Catalyst Partners from August 2013 to May 2016. Prior to that, she held a number of positions at Black Stone Minerals Company, including President and Chief Operating Officer and Executive Vice President and Chief Financial Officer. Prior to Black Stone, she was Chief Financial Officer for EnCap Investments from 1994 to 2003. Currently, Hallie has served on the board of Oil States International since July 2019. Previously, she was on the boards of Noble Midstream, PetroLogistics, Mississippi Resources, Bright Horizons, Grey Rock Energy Management and Black Stone. Hallie is a Certified Public Accountant.