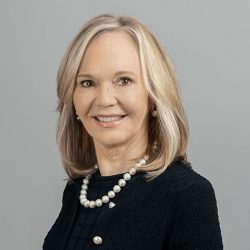 Janet Carrig joined EQT’s Board of Directors in July 2019 and currently serves as Chair of the Corporate Governance Committee and as a member of the Public Policy and Corporate Responsibility Committee. She was Senior Vice President, General Counsel and Corporate Secretary of ConocoPhillips from 2007 through 2018 and Deputy General Counsel and Corporate Secretary from 2006 through 2007. From 2004 through 2006, she was a Partner at Zelle, Hofmann, Voelbel, Mason & Gette. From 2003 through 2004, Janet was Senior Vice President, Chief Administrative Officer and Chief Compliance Officer of Kmart Corporation. She was Executive Vice President, Corporate Development, General Counsel and Secretary of Kellogg Company from 1999 through 2003. She has a long history of fiduciary responsibility to a wide range of institutional investors and has served as Trustee of Columbia Funds Series Trust I and Columbia Funds Variable Insurance Trust and predecessors since 1996.