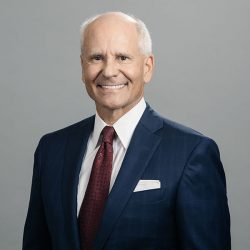 James McManus II joined EQT’s Board of Directors in July 2019 and currently serves as a member of the Management Development and Compensation and Corporate Governance Committees. He is the former Chairman, Chief Executive Officer and President of Energen Corporation (a publicly traded E&P company focused on the Permian Basin acquired by Diamondback Energy in 2018), where he also held previous roles including, President and Chief Operating Officer and President and Chief Operating Officer of Energen’s E&P subsidiary, Energen Resources. Beginning in 2014, James served as a Director on the board of Questar Corporation, a natural gas focused energy company, until its acquisition by Dominion Resources in 2016. He has prior experience serving on numerous industry boards, including the Independent Producers Association of America, the American Exploration Production Council and the National Petroleum Council. James also has public company board experience and strong financial and accounting experience, having been at PricewaterhouseCoopers early in his career.